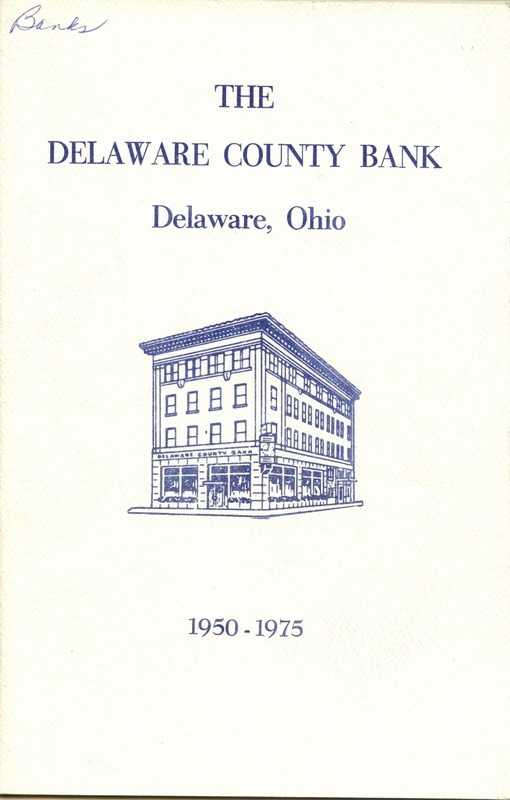 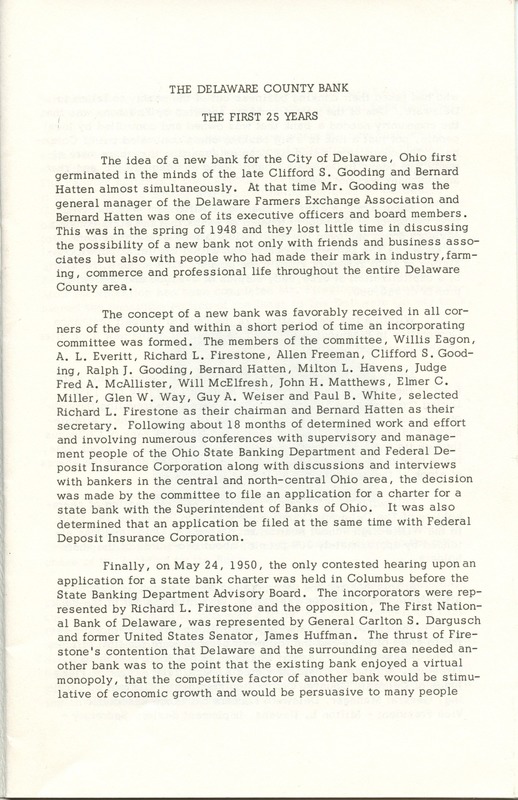 The idea of a new bank for the City of Delaware, Ohio first

germinated in the minds of the late Clifford S. Gooding and Bernard

Hatten almost simultaneously. At that time Mr. Gooding was the

general manager of the Delaware Farmers Exchange Association and

Bernard Hatten was one of its executive officers and board members.

ciates but also with people who had made their mark in industry, farm-

ing, commerce and professional life throughout the entire Delaware

committee was formed. The members of the committee, Willis Eagon,

Richard L. Firestone as their chairman and Bernard Hatten as their

secretary. Following about 18 months of determined work and effort

and involving numerous conferences with supervisory and manage-

posit Insurance Corporation along with discussions and interviews

with bankers in the central and north-central Ohio area, the decision

state bank with the Superintendent of Banks of Ohio. It was also

State Banking Department Advisory Board. The incorporators were rep-

resented by Richard L. Firestone and the opposition, The First Nation-

stone's contention that Delaware and the surrounding areas needed an-

monopoly, that the competitive factor of another bank would be stimu-

lative of economic growth and would be persuasive to many people 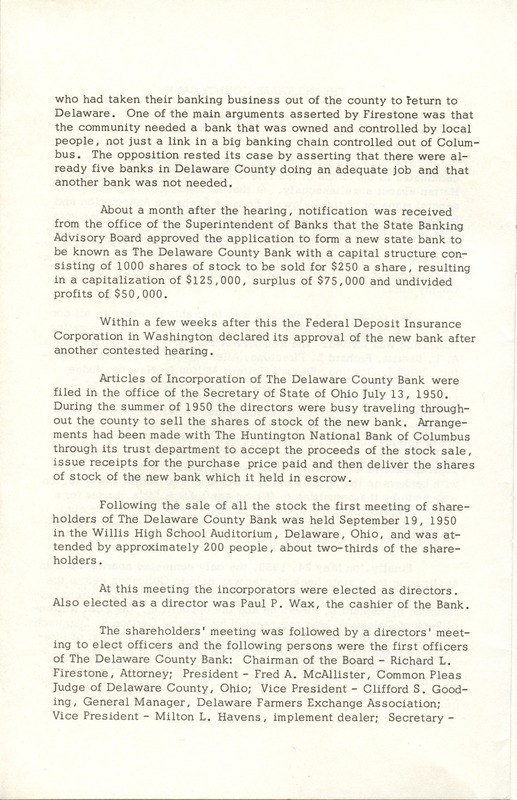 Delaware. One of the main arguments asserted by Firestone was that

people, not just a link in a big banking chain controlled out of Colum-

bus. The opposition rested its case by asserting that there were al-

another bank was not needed.

About a month after the hearing, notification was received

Within a few weeks after this the Federal Deposit Insurance

Corporation in Washington declared its approval of the new bank after

Articles of Incorporation of The Delaware County Bank were

During the summer of 1950 the directors were busy traveling through-

out the county to sell the shares of stock of the new bank. Arrange-

ments had been made with The Huntington National Bank of Columbus

through its trust department to accept the proceeds of the stock sale,

of stock of the new bank which it held in escrow.

holders of The Delaware County Bank was held September 19, 1950

in the Willis High School Auditorium, Delaware, Ohio, and was at-

tended by approximately 200 people, about two-thirds of the share-

At this meeting the incorporators were elected as directors.

Also elected as a director was Paul P. Wax, the cashier of the Bank.

The shareholders' meeting was followed by a directors' meet-

of The Delaware County Bank: Chairman of the Board - Richard L. 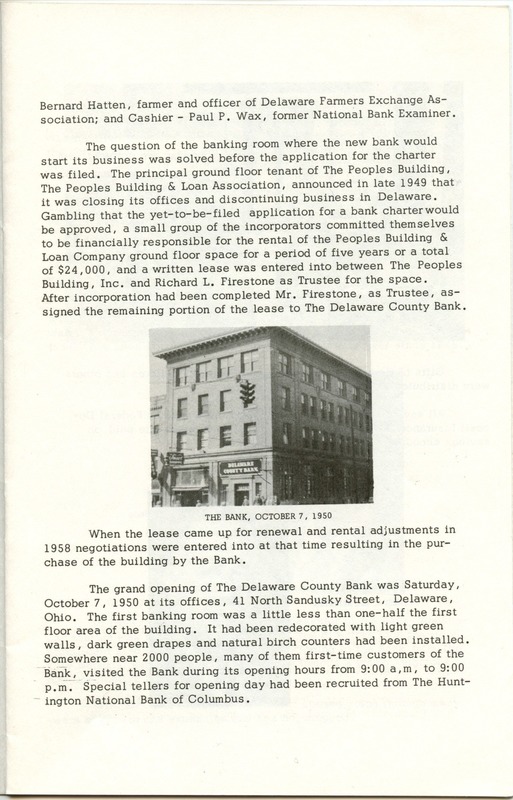 Bernard Hatten, farmer and officer of Delaware Farmers Exchange As-

The question of the banking room where the new bank would

start its business was solved before the application for the charter

was filed. The principal ground floor tenant of The Peoples Building,

The Peoples Building & Loan Association, announced in late 1949 that

it was closing its offices and discontinuing business in Delaware.

be approved, a small group of the incorporators committed themselves

to be financially responsible for the rental of the Peoples Building &

of $24,000, and a written lease was entered into between The Peoples

Building, Inc. and Richard L. Firestone as Trustee for the space.

After incorporation had been completed Mr. Firestone, as Trustee, as-

signed the remaining portion of the lease to The Delaware County Bank.

When the lease came up for renewal and rental adjustments in

chase of the building by the Bank.

The grand opening of The Delaware County Bank was Saturday,

Ohio. The first banking room was a little less than one-half the first

floor area of the building. It had been redecorated with light green

Somewhere near 2000 people, many of them first-time customers of the

p.m. Special tellers for opening day had been recruited from The Hunt- 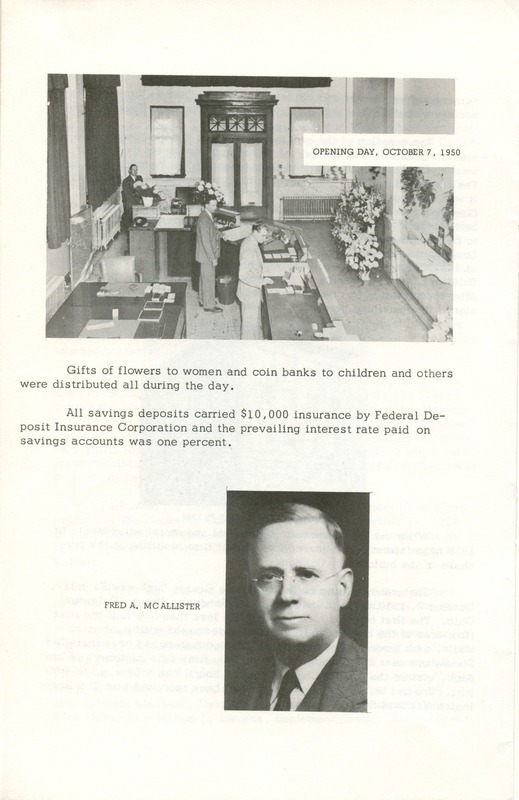 were distributed all during the day.

posit Insurance Corporation and the prevailing interest rate paid on

savings accounts was one percent. 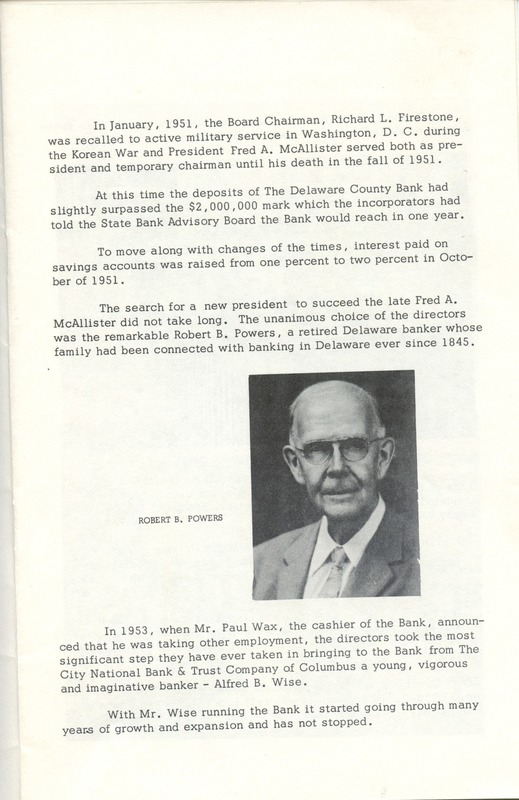 In January, 1951, the Board Chairman, Richard L. Firestone,

was recalled to active military service in Washington, D.C. during

the Korean War and President Fred A. McAllister served both as pre-

sident and temporary chairman until his death in the fall of 1951.

At this time the deposits of The Delaware County Bank had

slightly surpassed the $2,000,000 mark which the incorporators had

told the State Bank Advisory Board the Bank would reach in one year.

To move along with changes of the times, interest paid on

The search for a new president to succeed the late Fred A.

McAllister did not take long. The unanimous choice of the directors

was the remarkable Robert B. Powers, a retired Delaware banked whose

family had been connected with banking in Delaware ever since 1845.

ced that he was taking other employment, the directors took the most

and imaginative banker -- Alfred B. Wise.

With Mr. Wise running the Bank it stopped going through many

years of growth and expansion and has not stopped. 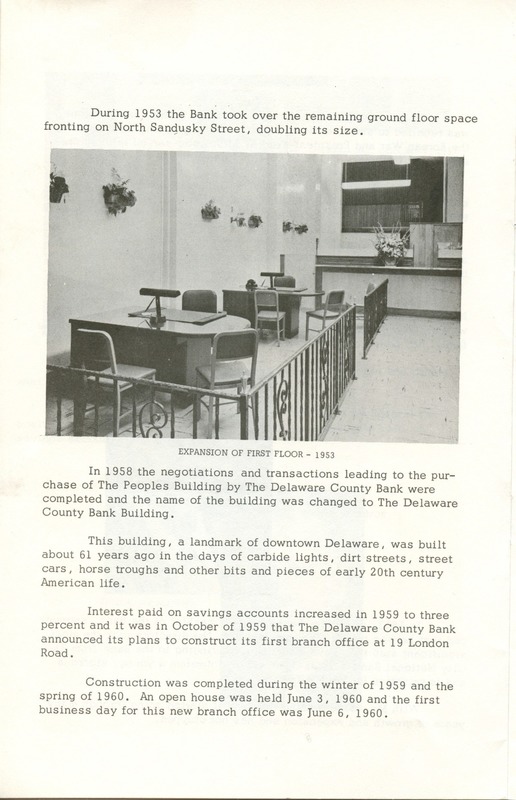 During 1953 the Bank took over the remaining ground floor space

In 1958 the negotiations and transactions leading to the pur-

chase of The Peoples Building by The Delaware County Bank were

This building, a landmark of downtown Delaware, was built

about 61 years ago in the days of carbide lights, dirt streets, street

cars, horse troughs and other bits and pieces of early 20th century

Interest paid on savings accounts increased in 1959 to three

Construction was completed during the winter of 1959 and the

business day for this new branch office was June 6, 1960. 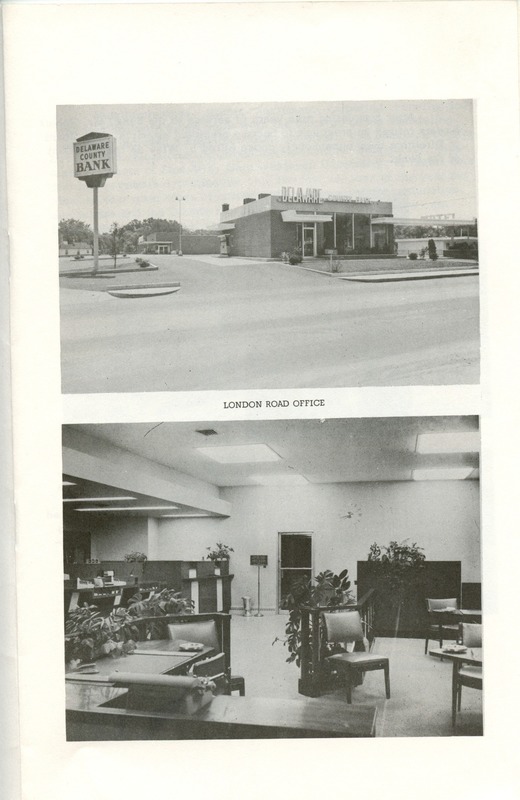 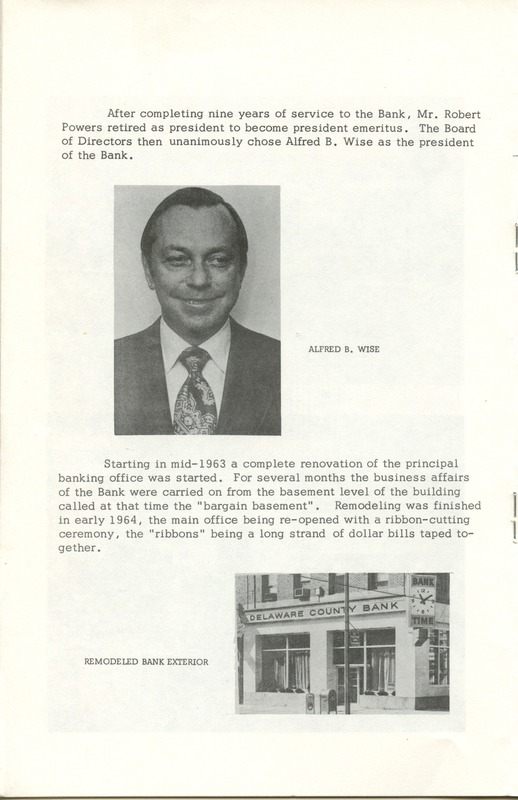 After completing nine years of service to the Bank, Mr. Robert

Powers retired as president to become president emeritus. The Board

of Directors then unanimously chose Alfred B. Wise as the president

Starting in mid-1963 a complete renovation of the principal

banking office was started. For several months the business affairs

called at that time the "bargain basement". Remodeling was finished

in early 1964, the main office being re-opened with a ribbon-cutting

ceremony, the "ribbons" being a long strand of dollar bills taped to- 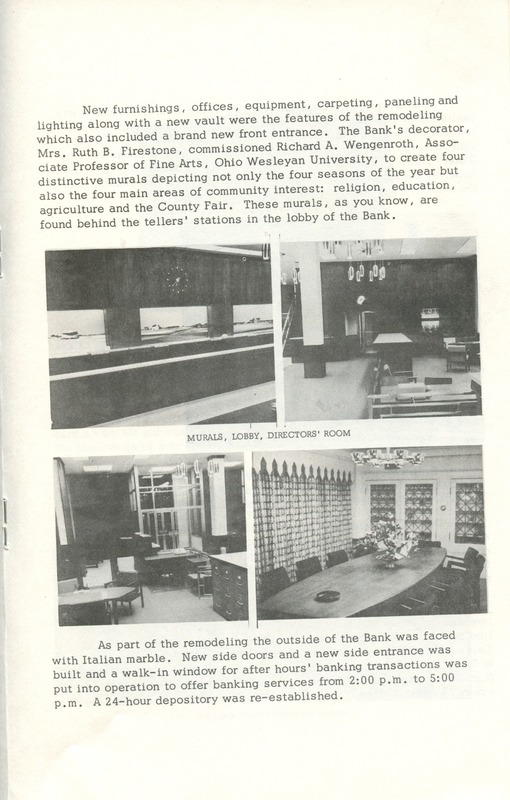 agriculture and the County Fair. These murals, as you know, are

found behidn the tellers' stsations in the lobby of the Bank.

with Italian marble. New side doors and a new side entrance was

p.m. A 24-hour depository was re-established. 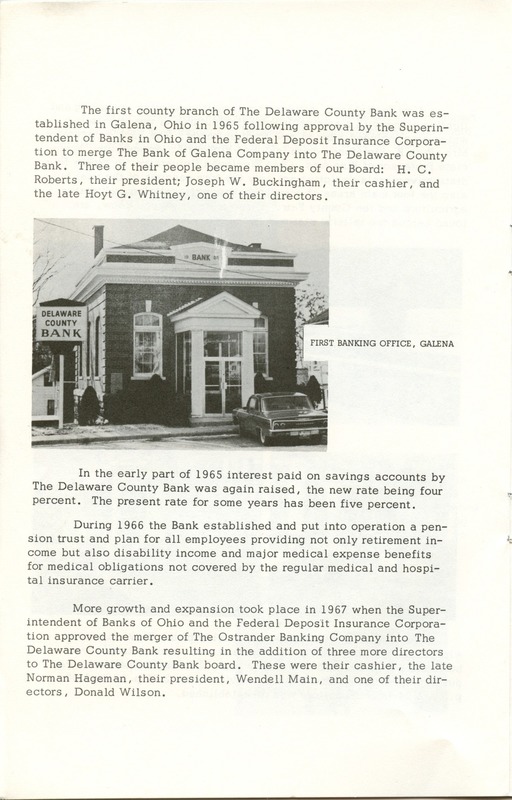 The first county branch of The Delaware County Bank was es-

tablished in Galena, Ohio in 1965 following approval by the Superin-

tendent of Banks in Ohio and the Federal Deposit Insurance Corpora-

Bank. Three of their people became members of our Board: H. C.

Roberts, their president; Joseph W. Buckingham, their cashier, and

the late Hoyt G. Whitney, one of their directors.

The Delaware County Bank was again raised, the new rate being four

percent. The present rate for some years has been five percent.

During 1966 the Bank established and put into operation a pen-

for medical obligations not covered by the regular medical and hospi-

More growth and expansion took place in 1967 when the Super-

intendent of Banks of Ohio and the Federal Deposit Insurance Corpora-

tion approved the merger of The Ostrander Banking Company into The

to The Delaware County Bank board. Thse were their cashier, the late

Norman Hageman, their president, Wendell Main, and one of their dir- 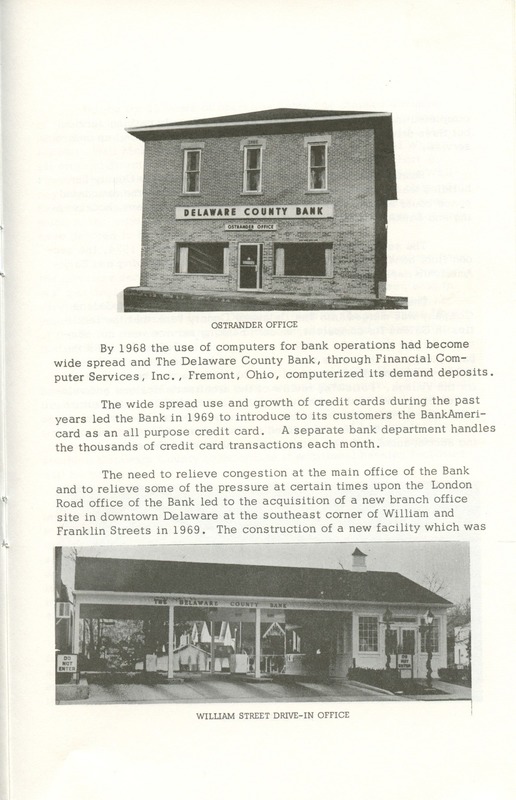 By 1968 the use of computers for bank operations had become

wide spread and The Delaware County Bank, through Financial Com-

card as an all purpose credit card. A separate bank department handles

the thousands of credit card transactions each month.

site in downtown Delaware at the southeast corner of William and

Franklin Streets in 1969. The construction of a new facility which was 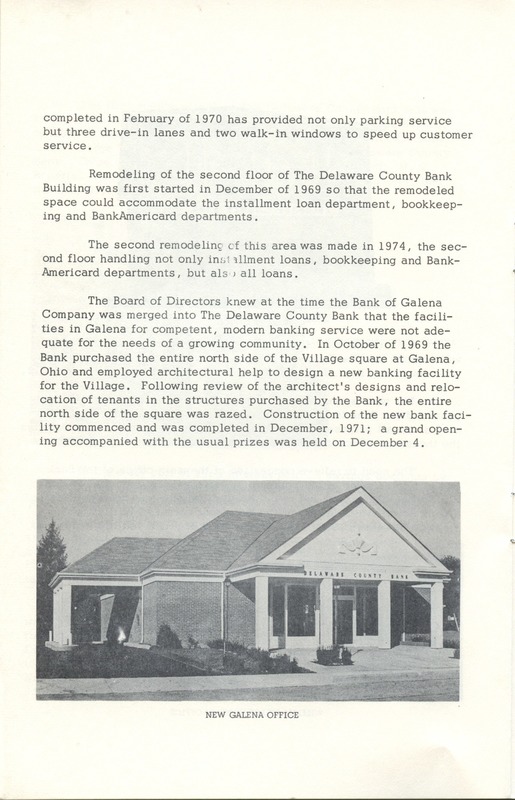 completed in February of 1970 has provided not only parking service

Remodeling of the second floor of The Delaware County Bank

The second remodeling of this area was made in 1974, the sec-

ond floor handling not only installment loans, bookkeeping and Bank-

Americard departments, but also all loans.

Company was merged into The Delaware County Bank that the facili-

ties in Galena for competent, modern banking service were not ade-

quate for the needs of a growing community. In October of 1969 the

Bank purchased for the entire north side of the Village square at Galena,

for the Village. Following review of the architect's designs and relo-

cation of tenants in the structures purchased by the Bank, the entire

north side of the square was razed. Construction of the new bank faci-

lity commenced and was completed in December, 1971; a grand open-

ing accompanied with the usual prizes was held on December 4. 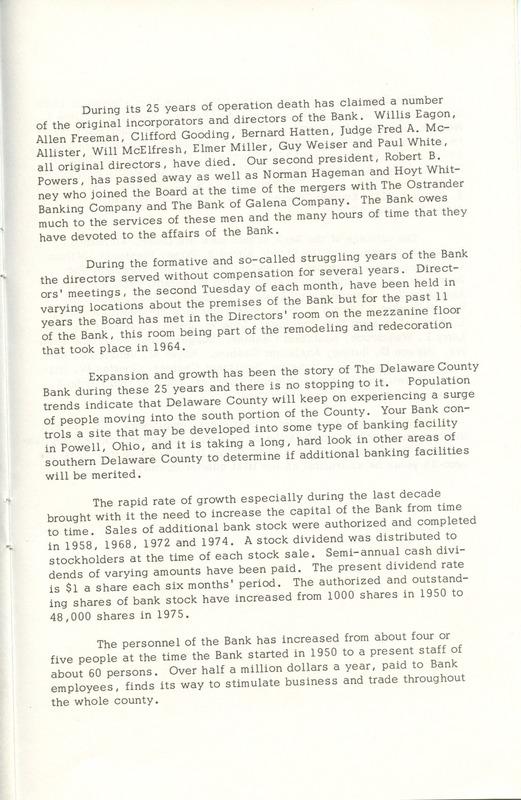 During its 25 years of operation death has claimed a number

of the original incorporators and directors of the Bank. Willis Eagon,

all original directors, have died. Our second president, Robert B.

Powers, has passed away as well as Norman Hageman and Hoyt Whit-

Banking Company and The Bank of Galena Company. The Bank owes

have devoted to the affairs of the Bank.

During the formative and so-called struggling years of the Bank

the directors served without compensation for several years. Direct-

ors' meetings, the second Tuesday of each month, have been held in

of the Bank, this room being part of the remodeling and redecoration

Expansion and growth has been the story of The Delaware County

Bank during these 25 years and there is no stopping it. Population

trends indicate that Delaware County will keep on experiencing a surge

of people moving into the south portion of the County. Your Bank con-

in Powell, Ohio, and it is taking a long, hard look in other areas of

The rapid rate of growth especially during the last decade

to time. Sales of additional bank stock were authorized and completed

stockholders at the time of each stock sale. Semi-annual cash divi-

dends of varying amounts have been paid. The present dividend rate

is $1 a share each six months' period. The authorized and outstand-

The personnel of the Bank has increased from about four or

about 60 persons. Over half a million dollars a year, paid to Bank

employees, finds its way to stimulate business and trade throughout 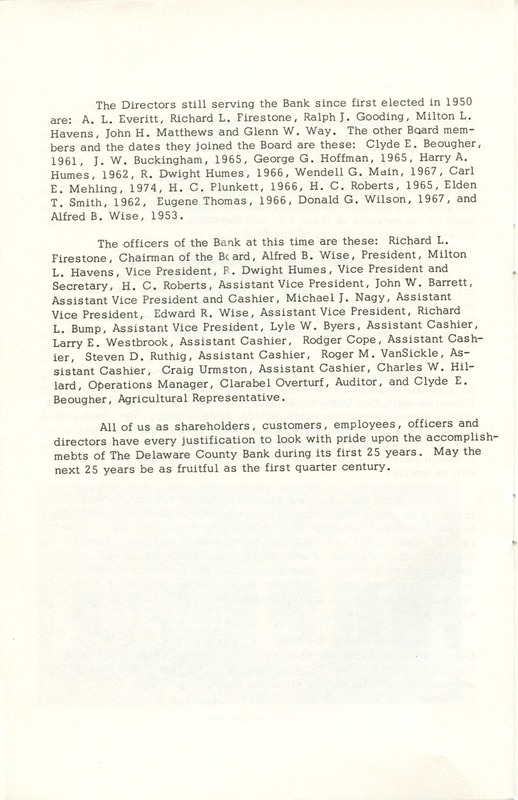 The Directors still serving the Bank since first elected in 1950

Havens, John H. Matthews and Glenn W. Way. The other Board mem-

bers and the dates they joined the Board are these: Clyde E. Beougher,

The officers of the Bank at this time are these: Richard L.

Firestone, Chairman of the Board, Alfred B. Wise, President, Milton

All of us as shareholders, customers, employees, officers and

directors have every justification to look with pride upon the accomplish-

mebts of The Delaware County Bank during its first 25 years. May the

next 25 years be as fruitful as the first quarter century. 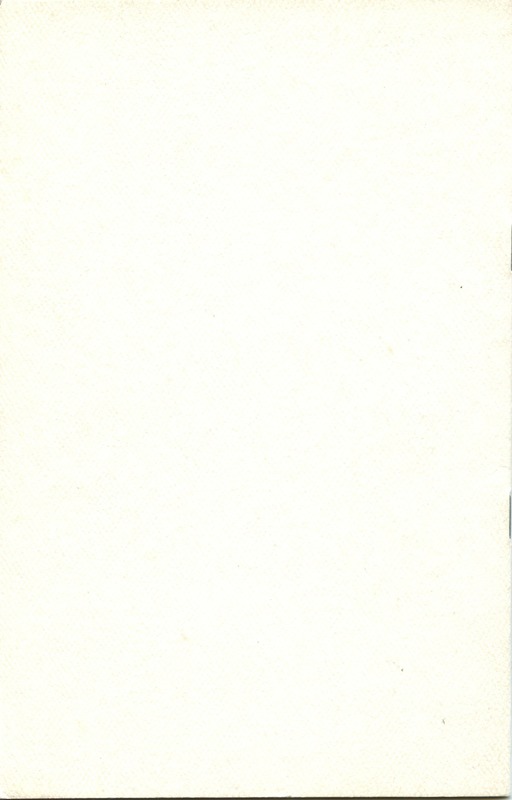 This book is a history of the first 25 years of the Delaware County Bank in Delaware, Ohio.